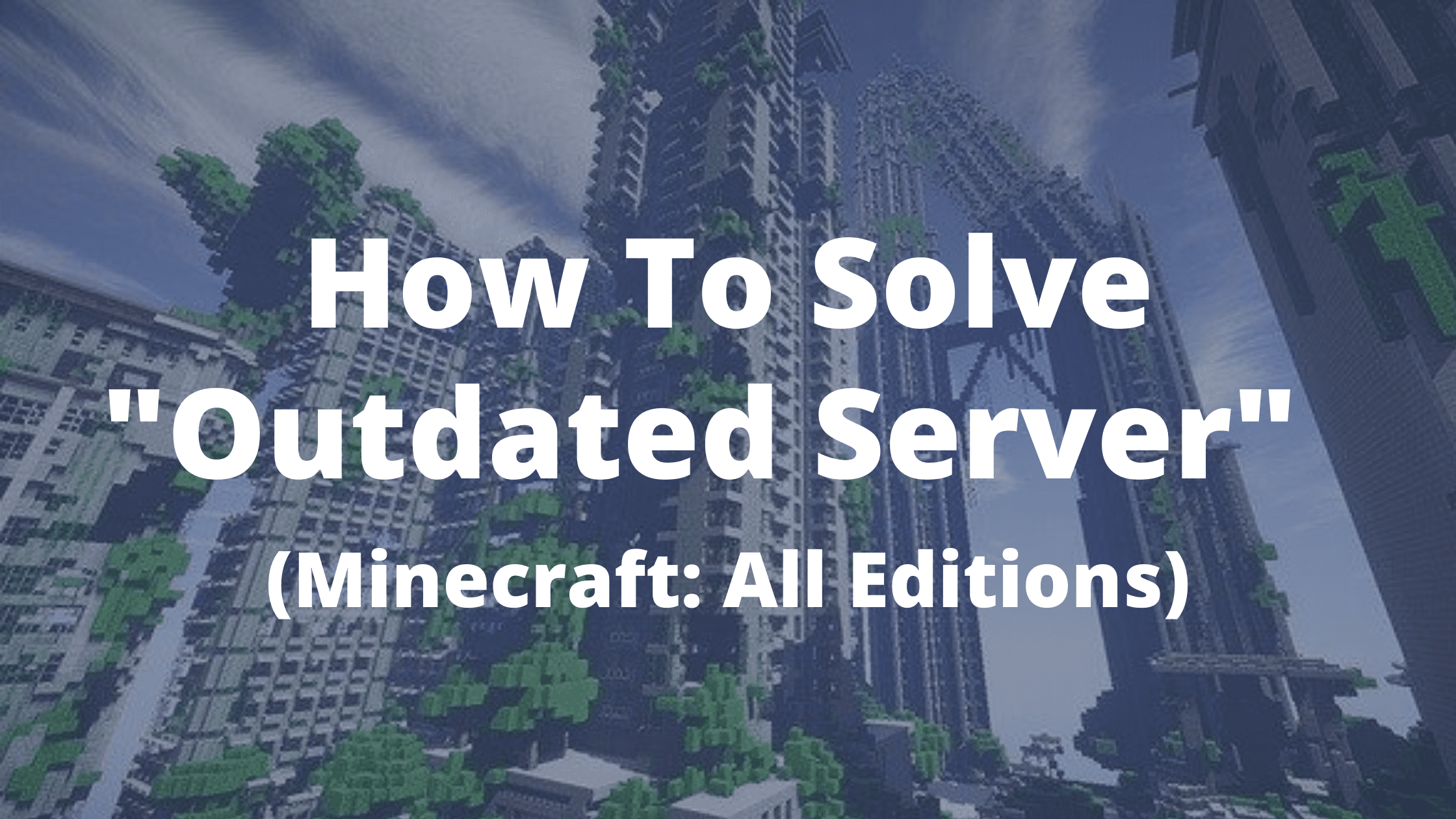 Have you come across “Minecraft Could not connect: Outdated servers” or “Disconnected by the server – Outdated Server!” error while playing Minecraft on your device? Then this article is for you. In this article, we are going to show you what exactly causes the “Outdated Server” error and how to fix it on your Minecraft server.
Minecraft is a popular Arcade game where you can perform different actions in your own world. The game is very popular in western countries. With more than 100 Million users Worldwide, Microsoft bought the game for $5 billion making it the biggest ever sold game in history. With Minecraft, the user can build its own World where they can build City, Structures, Lakes, Houses, Animals, and everything that a city needs.
Recently, Many Schools and Colleges decided to make Minecraft a part of their education system just because of its educational importance. However, Many times people face minor errors which are common but they can definitely ruin your gaming experience. One of them is “Minecraft – Outdated Server” Error.

What is the Outdated Server error in Minecraft

Outdated Server error generally occurs when you have an outdated version of Minecraft or you are using a beta version for connecting to a server/world with Higher Version. This means that you are not allowed to use the servers/world until you update your game version.

As said earlier, The error is caused when you are using an old version of the game to connect to the server or to the World that has a higher version. All the devices on the server have to be on the same gaming version.
This error is also caused when you are using the Beta version of Minecraft. Beta versions can not play with Stable versions and vice-versa. If you are using the Beta version then you need to uninstall, Reinstall a stable version and then try connecting to the real world. Earlier we also wrote a detailed guide about how to find Minecraft server IP and connect your game to other systems and enjoy Minecraft with your Friends.

When you experience such an issue Each individual user on the server has to check their Client version before attempting to connect to the server. If you have an outdated client version then immediately update it to the latest version of Minecraft client to easily solve this error.
If you are still confused and don’t have any idea about how to check the Minecraft version then follow these steps:

Once, you have your version code ready, Go to the Minecraft Wiki page to check if your Version code matches the Latest version available. If it does not match then you will have to update your game to the latest version to solve the “Outdated server” problem while p

How to Update Minecraft

When you have a working internet connection at that time Launch your Minecraft client and it will automatically update your game to the latest version available.
If you are using Minecraft on your Android/ iOS device or on your Xbox then follow these steps to update your game.

Update Minecraft on Your Mobile Device

If you are using Minecraft pocket edition on your Android or iOS mobile then follow this guide to successfully update your game.
Android Users

iOS Users
If you already have Minecraft installed on your Mobile then follow these steps:

Update Minecraft on Xbox One

If there is no update available or your game is already up to date then you don’t have to do anything.

All the games on PS 4 receive automatic updates. Whenever the game is ready to update and you have a working internet connection, The Playstation will automatically update your game to the latest version that is available. If not, then select the game using the options button and click on “Check for update” to update Minecraft manually on PS 4

If you are using Minecraft for Windows then there are high chances that your game is already up to date and you don’t have to perform any action.
If you want to update your game Manually then open the “Microsoft Apps Store”, Click on the three dots icon at the top-right corner and choose “Downloads and Updates”. From the list of apps, select “Minecraft” and click on the “Update” option to update your game.
Even after performing the above actions, If you are still facing the “Outdated server” Error then you should check if you have a beta version of Minecraft installed on your System. If yes, unenroll from the beta version to a Stable Minecraft Version.

How to unenroll from Minecraft Beta Version to a Stable Version

Beta users are not allowed to connect with other users who have a stable Minecraft version installed on their system. To play the game with other players on the server you have to unenroll from beta tester to a Stable version user.

For Xbox One and Windows 10 users:

Minecraft is a fun game to play and errors or warnings such as “Minecraft Outdated Server” can ruin your entire gaming experience. As mentioned earlier, The easiest way to fix this error is by performing a Version check to match your game version to the current version available. If the version does not match then look for the method to update your game to the latest version.
Also if you have rolled in for a beta tester then you won’t be able to play the game with real-world players. Unenroll from the beta version and download a stable one.

How to Host a Watch Party on Twitch